Halušky or halushki in English transcription are sort of Slovak home-made pasta made from potato dough. They are similar to German spätzle. Though you can top them with just about anything, the most typical topping is Bryndza, a special sheep cheese, and fried bacon bits. This combination gives “Bryndzové halušky”, the Slovak national dish. Another popular topping is cabbage.

There is also another kind of halushki, when you don’t use potatoes for a dough, only flour, water and egg (called “nokerle”). They are served more like a side dish, with goulash or paprikash. Or they are used in soup replacing noodles, and in this case, you can add chopped parsley and/or chicken liver into the dough.

For Bryndzove halushki, you will need as well:

While preparing your dough for dumplings, put a large pot of salted water to boil.

You can use a food processor to make a puree from peeled, chopped, raw potatoes, or do it traditional way, using a nutmeg side of the grater. Add salt, egg and flour a little at a time, processing after each addition, until a spoon will stick straight up in the dough. The exact amount of flour will depend on the size and type of the potatoes, and whether you use a grater or a food processor. You can use a little bit of water if needed. 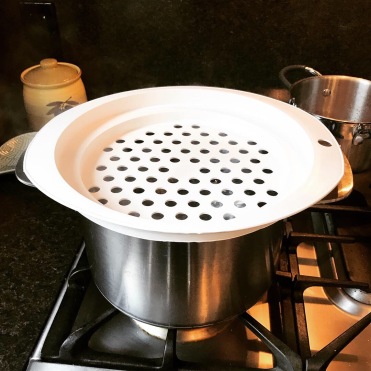 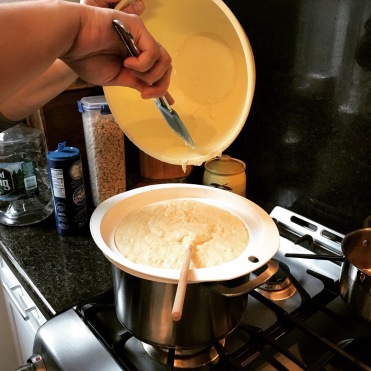 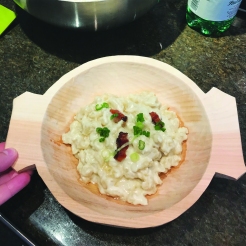 Serving in the traditional plate

When the water in your pot is well boiling, turn down the heat, pose the special “haluski dough strainer” on the pot (you can order it from our store) and transfer your dough on it. With a wooden spoon pass all dough through the holes into the boiling water and stir it gently. Wait until halushki all float on the top to remove them into a colander and let them drain.

In the meantime, in the serving bowl, mix Bryndza with a tiny quantity of water from your pot, so you obtain more smooth texture. When your halushki are drained, you can put them directly in the bowl with Bryndza and gently stir all together. You should serve them immediately as they are at their best when eaten straight after they’ve been cooked.

Traditionally, we top halushki with bits of grilled bacon and few spoons of grease. Finally, if you want, you can also add one spoon of sour cream and chopped chives.

Back in the distant past, halushki were not always the traditional dish of Slovaks. Bryndza came to Slovakia from Balkan region, as revealed first by the historical tracks from the end of 15th century. While potatoes were well grounded in Slovakia from 19th century. Nowadays, in the context of global gastronomy, this dish has an absolute uniqueness and is served for example at the Embassies receptions as a Slovak national and traditional dish. 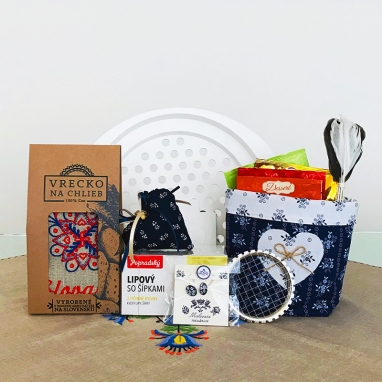 In KITnDO, we believe that proposing the Haluski dough strainer as part of our Slovak Welcome kit will help to preserve this recipe and make it even more popular among younger generation living abroad. As mentioned before, they are many possibilities how to serve haluski, whether the traditional way or completely reinvented. So the next time you cook haluski faraway from Slovakia, please share your picture with our community and use #kitndo to be reposted on our social channels.

And here is the video to see how easy is Haluski dough strainer to use:

One thought on “Slovak Halushki with Bryndza cheese”

With this blog we would like to have space to develop different topics such as cultural diversity, traditions, expatriation, and to share different stories of immigrants or expats. Also, we want to share some recipes related to different cultures.